TORONTO, ON, November 11, 2021 — Hut 8 Mining Corp. (Nasdaq | TSX: HUT) (“Hut 8” or the “Company”), one of North America’s largest, innovation-focused digital asset mining pioneers, supporting open and decentralized systems since 2018, is pleased to announce its financial results for the quarter ending September 30, 2021 (“Q3-2021”).  All dollar figures are in Canadian Dollars (“CAD”), unless otherwise stated.

“The third quarter of 2021 proved to be another exciting and dynamic step forward for Hut 8,” commented Shane Downey, Chief Financial Officer of the Company. “We are thrilled to have reported our third consecutive record-breaking quarterly results and to have already surpassed our goal of 5,000 Bitcoin held in reserve. Further, we have achieved an important milestone with final delivery of all 10,000 NVIDIA chips. Throughout early weeks of operation, these cutting-edge GPUs have proven to be highly efficient, mining at a total cost of under $3,000 per Bitcoin, delivering margins of approximately 95%.”

Hut 8 currently has an installed hashrate of approximately 1.7 EH/s, which includes the converted hashrate from our fleet of NVIDIA GPUs.

Our total current and contracted capacity stands at approximately 4.5 EH/s, which includes the converted hashrate from our fleet of NVIDIA GPUs.

As of September 30, 2021, the Company had a total Bitcoin balance of 4,729 with a market value of $263.8 million. Hut 8’s Bitcoin balance as of November 10, 2021, including 2,000 Bitcoin loaned as part of the Company’s fiat yield strategy, is approximately 5,053 Bitcoin, reflecting a market value of approximately $430 million. Hut 8 continues to strategically emphasize its “HODL” strategy, taking active steps to generate Canadian and US dollars to help fund operating expenses, so as to avoid selling Bitcoin.  During Q3-2021, 100% of self-mined Bitcoin was deposited into custody. 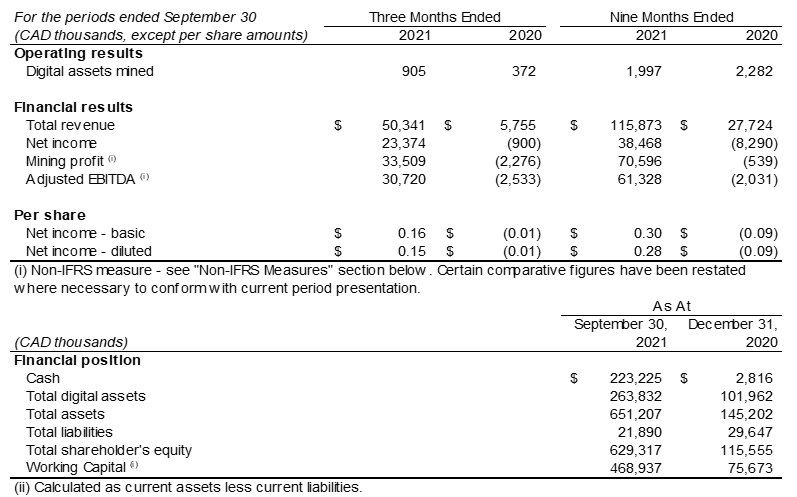 This press release makes reference to certain measures that are not recognized under IFRS and do not have a standardized meaning prescribed by IFRS. They are therefore not necessarily comparable to similar measures presented by other companies. The Company uses non-IFRS measures including “Adjusted EBITDA” and “Mining Profit” as additional information to complement IFRS measures by providing further understanding of the Company’s results of operations from Management’s perspective.

A full list of Hut 8 Mining analyst coverage can be found here:

Forward-looking information is necessarily based on a number of opinions, assumptions and estimates that, while considered reasonable by Hut 8 as of the date of this press release, are subject to known and unknown risks, uncertainties, assumptions and other factors that may cause the actual results, level of activity, performance or achievements to be materially different from those expressed or implied by such forward-looking information, including but not limited to the factors described in greater detail in the “Risk Factors” section of the Company’s Annual Information  Form dated March 25, 2021, which is available on www.sedar.com. These factors are not intended to represent a complete list of the factors that could affect Hut 8; however, these factors should be considered carefully. There can be no assurance that such estimates and assumptions will prove to be correct. The forward-looking statements contained in this press release are made as of the date of this press release, and Hut 8 expressly disclaims any obligation to update or alter statements containing any forward-looking information, or the factors or assumptions underlying them, whether as a result of new information, future events or otherwise, except as required by law.

Hut 8 is a digital asset mining company with industrial-scale operations in Alberta, Canada.  The Company is one of North America’s largest innovation-focused digital asset miners, supporting open and decentralized systems since 2018. Located in energy rich Alberta, Canada, Hut 8 has one of the highest installed capacity rates in the industry and holds more self-mined Bitcoin than any publicly traded company globally. Hut 8 is executing on its strategy of mining and holding Bitcoin, while building a diversified business and revenue strategy to grow and protect shareholder value, regardless of Bitcoin price action. The Company’s multi-pronged business strategy includes profitable digital asset mining, white-label high-performance compute hosting, as well as yield & income programs leveraging its Bitcoin held in reserve. Having demonstrated rapid growth and a stellar balance sheet, Hut 8 was the first publicly traded miner on the TSX and the first Canadian miner to be listed on The Nasdaq Global Select Market. Hut 8’s team of business building technologists are believers in decentralized systems, stewards of powerful industry-leading solutions, and drivers of innovation in digital asset mining and high-performance computing, with a focus on Environmental, Social and Governance (“ESG”) standards alignment. Through innovation, imagination, and passion, Hut 8 is helping to define the digital asset revolution to create value and positive impacts for its shareholders and generations to come.